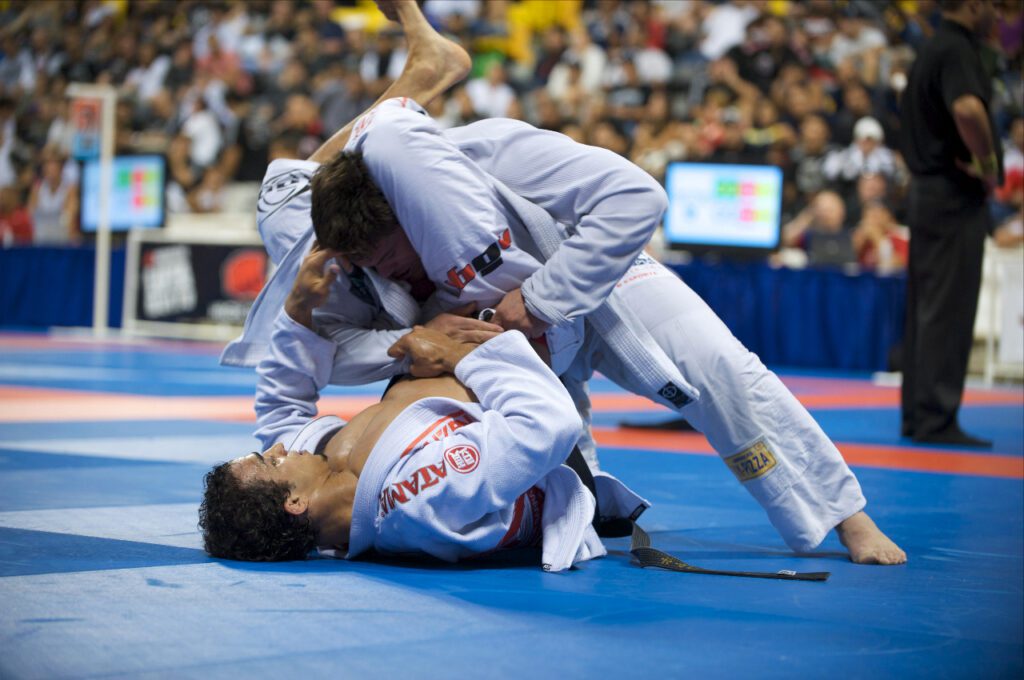 Many people on social media and beyond this week were mostly united in their disapproval of one particular airline’s actions in removing a passenger from an overbooked flight. This kind of viral news story can, however, create a great opportunity for you to promote your business.

Remember a few weeks ago when we said you should take advantage of publicity positive or negative to help promote your business? Sometimes a news story not related to your industry can provide you with an opportunity.

There have been some great examples of how to do this from an incident on an American plane. We’d like to share one with you in this week’s marketing analysis.

The incident involved the overbooking of a plane and United Airline’s need to remove some passengers from the flight. Even with an incentive of $800, there were no volunteers. This meant that the airline chose four passengers at random.

Three passengers complied with the request, but the victim of the incident refused to leave because he said he had to see patients in the morning. The airline called law enforcement agents who proceeded to drag the paying customer from his seat.

The drama was captured by fellow passengers on their phones. Videos of the incident have been viewed by millions across many social media platforms.

One savvy business that acted quickly to take advantage of the huge news item this story became was Gracie Jiu-Jitsu University who offer instruction with a great philosophy and unique selling point.

An important part of Jiu-Jitsu is grappling and so Ryron & Rener Gracie, head instructors at Gracie’s, decided to release a video teaching 6 defence techniques against being dragged.

You can see Gracie’s video ‘UNITED Drag Defenses – 6 Techniques for EVERY Traveler!’ on YouTube.

Drag Your Business to the Top

This is a brilliant example of a business using a trending news story to generate sales. It even finishes with a great call to action. As an incentive to get some new sign-ups, Gracie’s unlocked the first 5 lessons for everyone. The catch is that those lessons are only available for the next 5 days as of this post.

Controversial news items can provide great publicity, but only when you can apply it realistically to your business. Take your time when choosing a topical item to create a story around because the worst thing you can do is make yourself look like a desperate bandwagon jumper.

Make sure the news story is a good fit for your business, just like defence against being dragged makes for a very appropriate topic for a martial arts academy. One way to do this is to practice by brainstorming ideas every time a topical event comes around, even if you know it’s not quite right for your business.

With many practice attempts under your belt, when the perfect opportunity comes around, you’ll be ready. You’ll have lots of experience with what almost works and what definitely doesn’t work.

After putting a lot of ideas down on paper, you’ll know when you’ve come up with a gem of an idea. Creating the perfect piece of content will also be much easier for you because you’ll have a lot of past ideas to look back on.

How about using this as a starter template:

Story: A passenger was dragged off a plane that was overbooked

We should offer some free material for a limited time only to boost signups. We should also try to find the passenger for future PR.

Content: Describe the incident, then provide some humorous commentary of the situation.

Then go into a few demonstrations on how to defend against being dragged.

CTA: “If you like these drag defences, join us at gracieuniversity.com. This morning, I unlocked the first five lessons of Gracie Jiu-jitsu for everyone. But you have to log on within the next seven days to access them. And once they’re gone, they’re gone.

This is a great start, with the basic things you need to think about when coming up with some rough ideas. To expand on that, it would be great if you came up with a few different objectives for your business independently of this template.

Think about what business objectives you’d most like to work on, then whenever you come across an interesting story, pick an objective you think would fit.

By the looks of things, the link from Gracie’s YouTube video does not appear to have any kind of tracking code attached to it. This means that although they can track visitors from YouTube and other social media sites, they will find it difficult to attribute visitors to this campaign video specifically.

Whenever you do any campaign, remember to consider how you are going to track conversions. In this case, a cookie placed in the visitor’s browser that recorded a tracking code then associated it with a new user account would be a great way to track conversions. With that data, you’ll then be able to assess lifetime value from this and all other campaigns you track.

We can’t all go the whole nine yards, but at the very least, we can use tracked links to help verify the value of our promotions and the number of users it attracted to our site.

The key thing when tracking your success is to know what success is in the first place. As mentioned above, it would be a good idea to establish some business goals you think this kind of campaign could help you achieve.

Take your time and choose the right opportunity to take advantage of a viral news story. And don’t forget to practice.

Gaining Consent for Marketing is Essential

Burger King’s marketing campaigns have once again brought it into the spotlight. This example, however, has to go down as a fail because of the controversy it provoked. Designed for TV, the advert also made use of other technology in the viewer’s household. It is the use of the viewer’s smartphones that may have overstepped the bounds of consent, making this advert very controversial.

The message of the advert was simply that it isn’t possible to explain how great the Whopper is in a 20 second advert. Instead of asking the viewers to take a look at their website, Burger King took a more forward approach.

Let’s take a look at the 15 second advert (don’t worry, Google have deactivated any effect this advert had previously):

Most new smartphones have an assistant like Siri and Google Assistant that can be voice activated by uttering a short phrase such as ‘hello Google’. We can complete simple functions like finding out when your favourite football team is playing without having to type. Burger King decided to activate the feature and ask the device to search for their Whopper burger.

Here’s an example of how the advert worked and activated the Google Assistant before Google disabled it:

The advert activates the assistant, performs a search, then gives you the result. A complete success for the advert’s objectives, but in the end, netizens used the advert’s success against it.

Backlash Against Marketing Without Consent

Perhaps because some viewers were upset about their phones being effectively hijacked to show them adverts they were not interested in, they decided to take action. In hindsight, it may have been possible for Burger King to avoid some of the negative repercussions.

As you can see from the advert above, it brought up the Wikipedia entry for the burger and read it. Some Wikipedia users edited the wiki page to include negative definitions.

Some of the people affected seem to feel that the activation of their phone without their consent is a step too far. Certainly, it raises important questions about our privacy. Did Burger King invade that privacy and force us to do something we didn’t want to?

The advert is a reminder that the technology we carry around with us every day is capable of listening to us. The intended use of voice recognition was to make our lives easier, but this week’s controversial advert and resulting backlash has highlighted the fact that it has the potential to be used against us.

Although we don’t have the same resources as Burger King, there are things we can do to make use of modern technology. Whatever we do, it’s important that our audience feels they’re being treated fairly.

We could ask users to talk to their devices or to look for us on search engines which is done already. What the Whopper advert tells us is that people are not ready or are unwilling to let us make use of their devices without explicit consent.

We need to optimise our websites to provide the type of information voice assistants can use. Burger King’s advert relied on the Wikipedia featured snippet that defines their burger.

Because the results Google Assistant seems to read are featured snippets and sites like Wikipedia or IMDb often make up these snippets, Burger King left the results of their campaign in the hands of other organisations.

The best thing we can do, is optimise our websites so that they provide the featured snippets results. Featured snippets are drawn from the content of your page and types of special markup to do this. 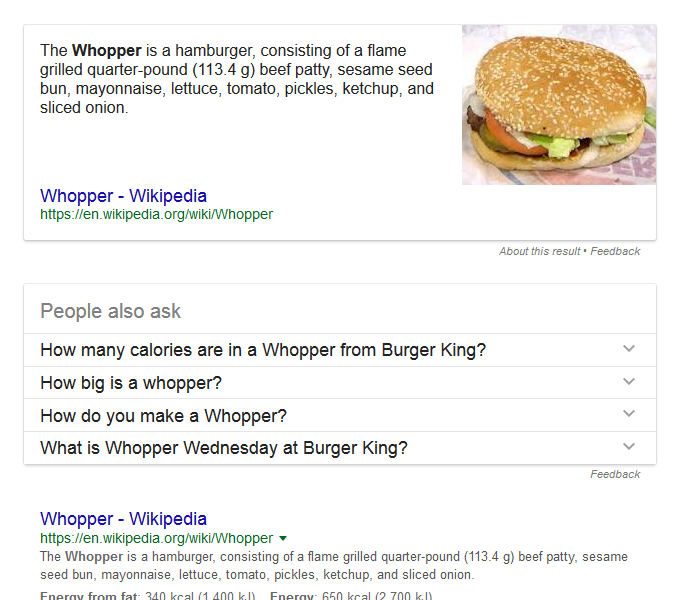 The image above shows the result of the question “What is the Whopper burger?” Take a look just below the result and you will see a list of other questions people ask.

Google often provide answers to some questions you ask in rich snippets at the top of the page so you don’t even need to click anything on the search page. If you can get your business featured there, it will provide the result for Google Assistant searches.

When people search, they often use questions to get the results they’re looking for. Assistants that make use of voice search mean that answering the questions people ask is becoming more important.

If you’re trying to establish yourself as the authority in your industry, featured snippets are a great way to show that. You need to start thinking about your entire website as a resource to answer questions.

Technology is great and provides many opportunities for us to connect with our audience. Whatever we do, we need to make sure it is done with their consent.

How do you feel about your privacy? Did Burger King go too far? How about Gracie’s amazing video?